The territory of the biosphere reserve Charyn is located in the basin of the Charyn river. It is a unique biogeosystem in the central part of the Ili intermontane basin in the Southeast of Kazakhstan. The reserve unites the canyon-like valley of the river Charyn with relict ash forest, adjacent areas of deserts with exotic relief and parts of mountain steppes of the Central Asian type in the Ulken-Boguty mountains. A unique geographic feature of the territory is the penetration of fragments of ecosystems of extreme arid deserts spreading on the territory of China and Mongolia. The combination of various climatic and orographic conditions has served as a basis for the formation of a unique complex of local ecosystems. The uniqueness of the landscape and biological diversity of the territory is also due to its location on the border of the major biogeographic boundary of the Asian subcontinent between the Dzungarian and Turanian deserts in Central and Inner Asia. In general, Charyn biosphere reserve preserves whole and unique complex of all biological and geological components of the pristine natural system.

The Charyn biosphere reserve is located in the Southeast of Kazakhstan, its administrative territory is located within the boundaries of 3 districts of the Almaty region: Uyghur (103,900 ha), Enbekeshikazakh (12,730 ha) and Rayimbek (10,420 ha). The central station of the reserve is in the village of Chunja. The territory of the biosphere reserve is located at a considerable distance from the regional center (Taldykorgan is in 370 km), and also from such a large metropolis as Almaty (300 km). The reserve plays a large positive role in the natural restoration of vegetation on the disturbed pastures of the surrounding area, thanks to the natural production of plant seed material, which avoids the development of desertification and land degradation. The whole valley of the river Charyn, starting from its source Chelkody-Su on the Southern slope of the Ketmen ridge and ending with its delta at the confluence of the river Ili, with its richest animals and plant resources, has long been inhabited by people. The population during the twentieth century was mainly engaged in agriculture: grain farming and livestock, as well as hunting, harvesting and processing of wood. The greatest impact over the last century was on desert, steppe and forest landscapes. However, the absence of large livestock farms and the peculiarities of the geomorphological structure have a positive effect on the purity of the reserve water. All this allows to preserve the landscape and biological diversity of the territory as a whole. 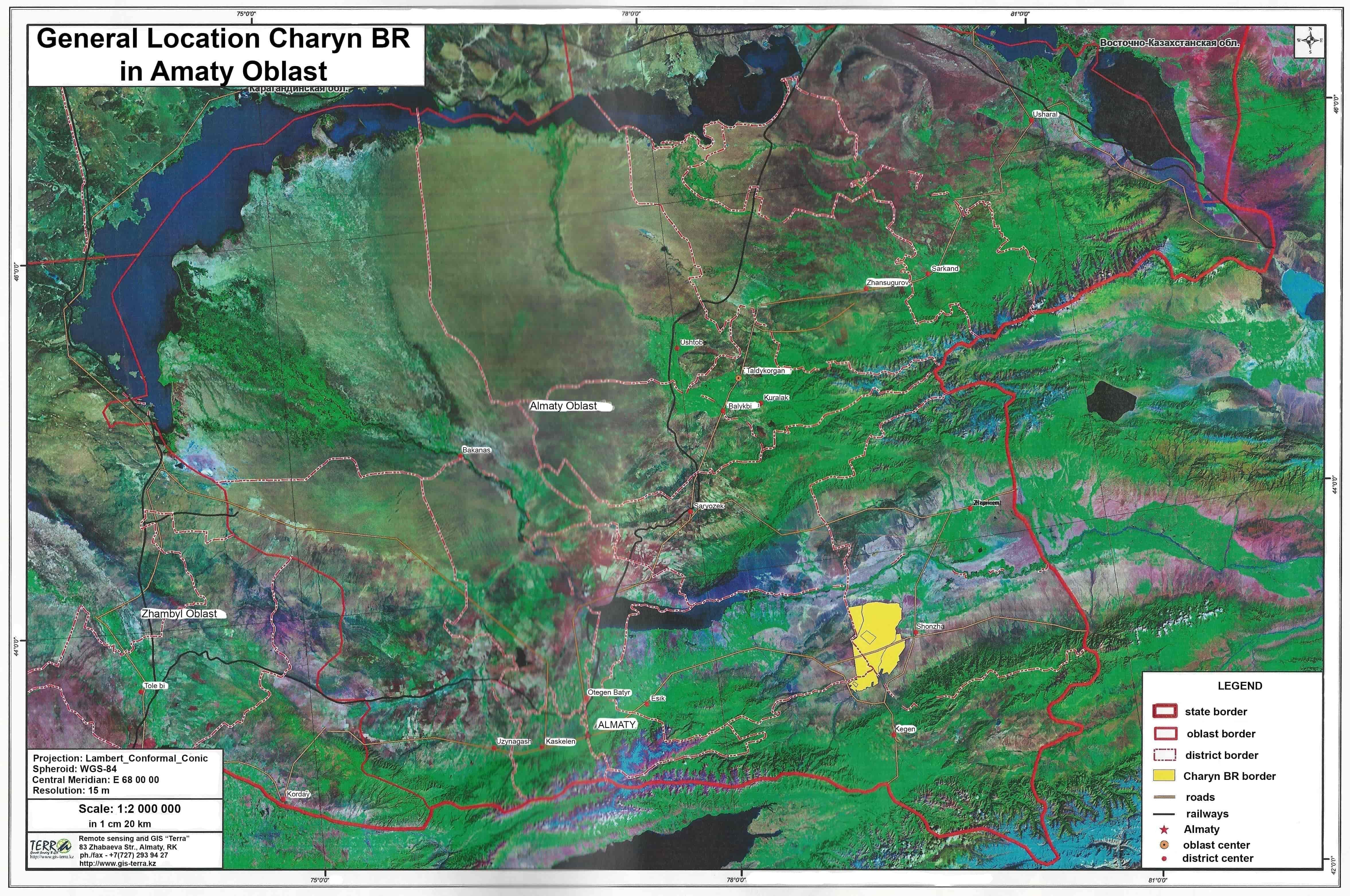 The diversity of the reserve's natural conditions, soil fertility, the richness of flora and fauna, water resources and the presence of nature monuments of international importance make it possible to use the reserve territory as the basis for establishment of the tourist cluster in the South and Southeast of Kazakhstan. It can be significantly supplemented by various types and categories of tourism (ecological, ethnic, cultural, scientific, recreational). At present, the Charyn biosphere reserve has the highest rating for tourists visiting in the Southeast of Kazakhstan. An effective organization for the tourists in the reserve helps prevent wild unorganized tourism and reduce recreational loads in the most valuable areas of the Ili intermontane basin, which ensures the sustainable conservation of natural complexes, including soil cover, vegetation, flora and fauna. This is especially true of the large Charyn canyon or the "Valley of Castles", which are the most attractive for tourists. Further development and organization of routes to the picturesque and original canyons of the Kyzyl-Karasai section will allow redistributing anthropogenic loads on these unique natural objects of the Charyn biosphere reserve.

Total area of Charyn Biosphere Reserve's territory is 239 731 ha. The main core zone occupies 9427.5 ha, the buffer zone – 117 622.5 ha, the transition zone – about 112 681 ha. All core and buffer zones correspond to the territory of Charyn state national nature park. Charyn state  nature national partk corresponds with the highest category (A1) of natural territories of IUCN. Area of the core biosphere reserve's zone is 9427,5 ha, which represents 2 parts. Altitudinal limits of biosphere reserve in the main part vary from 350 to 1800 m.

The main zone of biosphere reserve is strictly protected zone of nature reserve regime of Charyn state nature national park, which represents natural mountain complex of central part of Ili River basin including Big and Small Boguty mountains and Charyn canyon. Protective zone is created to protect from unfavourable influence from around specially protected natural territories, with prohibition in the limits of these zone of any activity, negatively influencing the condition and restoration of ecosystems of the given territory. There are lands not with drawn from the main land users on the buffer zone of biosphere reserve's territory, they consist of agricultural use lands and are under administration of agricultural organizations and private land users. Economic activity on separate parts of the protective zone (haymaking, cattle pasture) is carried out by agreement with state authority (Committee for Forestry and Wild Life under the Ministry of Agriculture of RK) and under control of the administration of state nature national park.

Buffer zone's area is 117 622.5 ha. The buffer zone is also under protective regime, but limited human activity is allowed taking into account conservation and restoration of objects of state nature-reserve fund and by corresponding agreement with state authorities. Tourist and recreational activities in this zone are carried out by state national nature park or physical and legal bodies if they have license to undertake tour operator activity. Physical and legal bodies are responsible for keeping the site in the condition to provide conservation of state nature reserve fund's objects, and comply with the environmental protection requirements.

Transition zone (zone of development, collaboration) of Charyn Biosphere Reserve is located on the territory of Uygur, Enbekshikazakh and Raiymbek administrative districts of Almaty oblast. Total land area of the transition zone is about 112 681 ha. The transition zone allows main types of traditional economic activity of land users, providing stable use of nature resources, but prohibiting or limiting types of nature use and economic activity, negatively influencing ecological systems. Limitation of economic activity of land plots owners and land users in the protective zone state national nature park are established by the resolutions of local authorities of oblast, cities of Republican importance, capitals in accordance with the present Law. This zone is used for living by local population, for development of economy, culture and education and provides function of stable development of the territory. 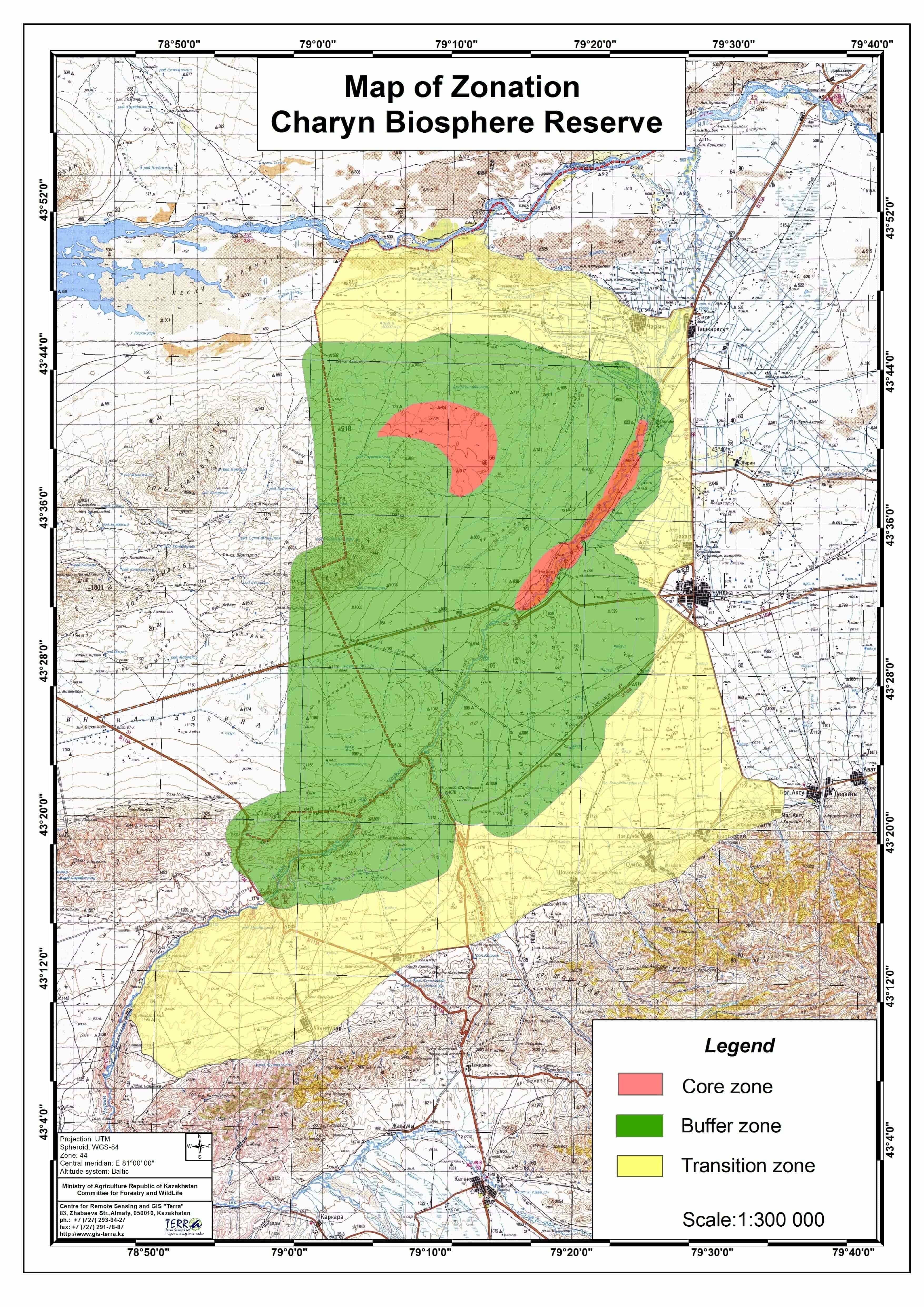 The floristic diversity of the Charyn Biosphere Reserve includes about 1000 species of higher vascular plants belonging to 426 genera and 90 families, which is 18% of the flora of Kazakhstan (5,600 species). This indicates significant floristic richness of the reserve territory, which is due to the interpenetration of species of different floras on the border of a large botanical-geographical boundary between the deserts of Turan and Dzungaria, conditionally passing along the Sharyn river. For comparison, in the Chu-Ili mountains, which exceed the area of ​​the biosphere reserve by 5 times, there are only 823 species. The Tarbagatai Range, which has an area almost 20 times larger, has only twice bigger list of flora. A large number of relict and endemic, often systematically isolated, species are present in the flora. Here are habitats of a number of rare and endangered plants, many of which are listed in the Red Data Book. 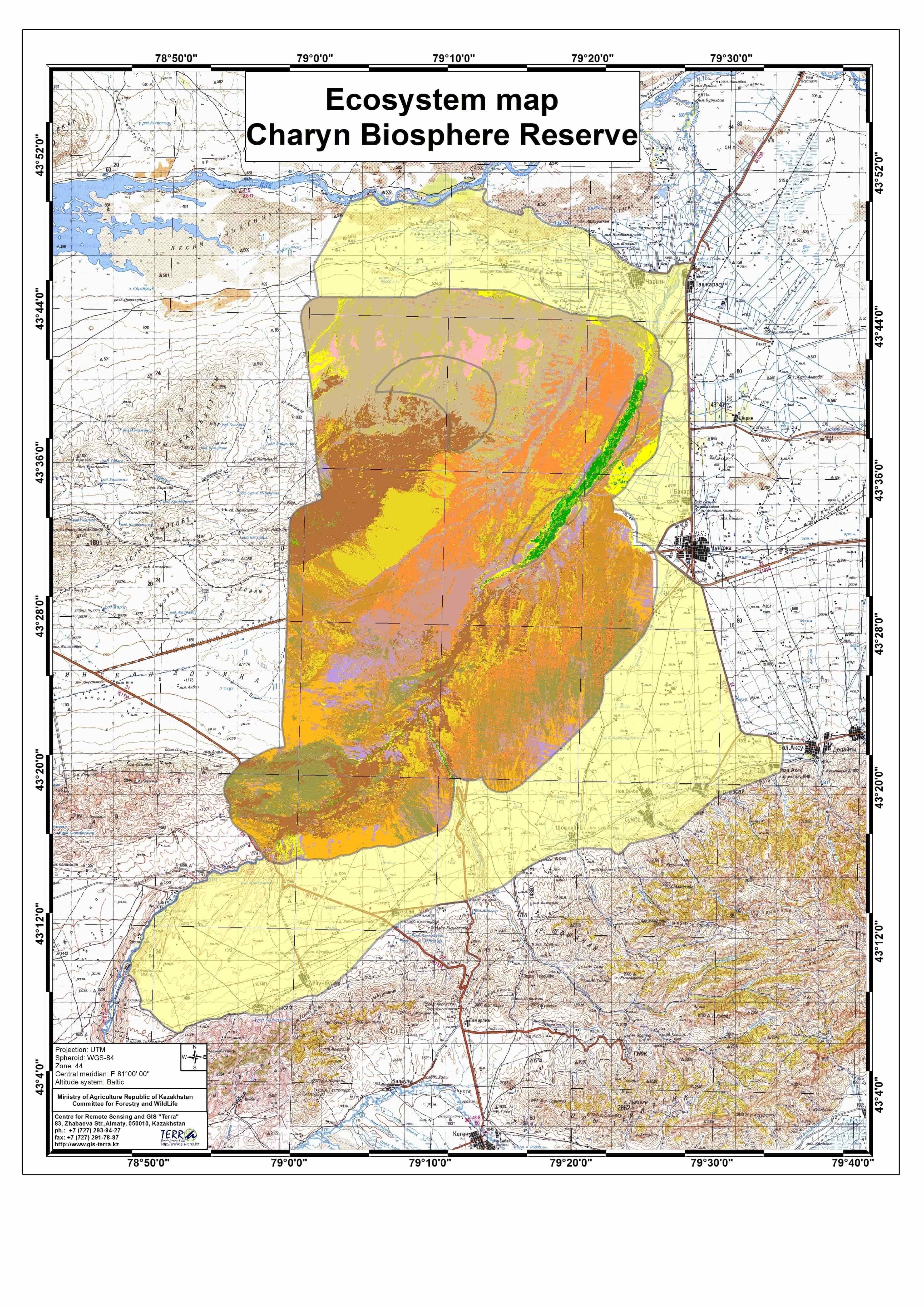 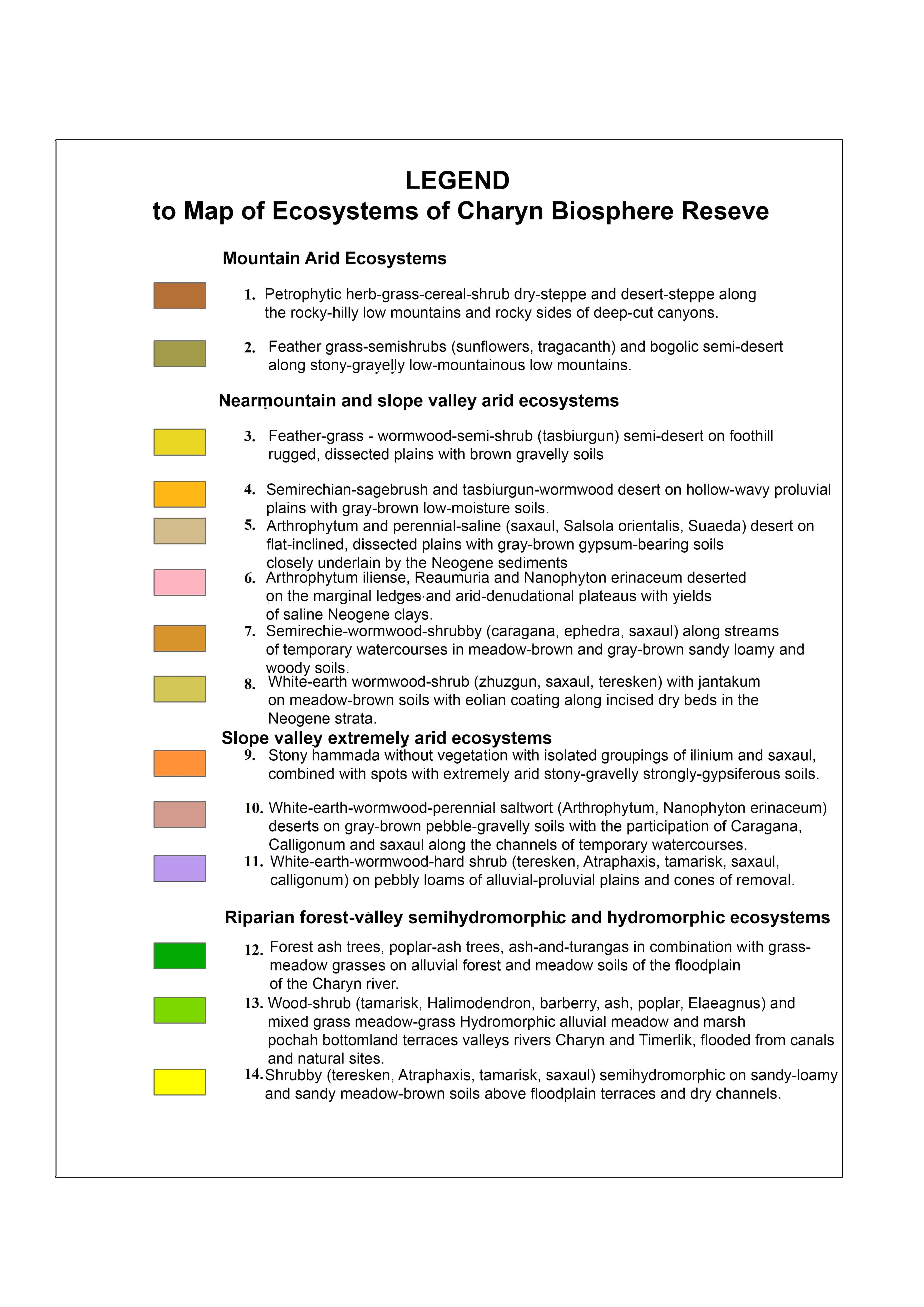 The natural conditions of the Charyn BR and adjacent areas are very diverse for the development of diversified agriculture and tourism. Here are the famous natural monuments - the only one in Eurasia (the second after Canada), the relic Ash Grove with an area of ​​5,000 hectares and the famous in Kazakhstan canyons of the Charyn River and the Temerlik River. The origin of the relict grove dates back to the Paleogene era. It is a unique monument of nature, preserved from the end of the Tertiary pre-glacial period. The basis of the monument is one of the oldest species of modern flora - Sogdian ash, referred to as an endangered species according to the international criteria of the IUCN. The Kazakhstan section of the Great Silk Road passes through the territory of the region. In the city of Zharkent there is a unique architectural and art museum "Zharkent Mosque". Currently, this section of the road is one of the key in the trade and economic ties between Kazakhstan and China. These natural and historical and architectural objects form the basis for the formation of a part of the tourist cluster in the South and Southeast of Kazakhstan. This cluster can be substantially supplemented by the possibilities of the Charyn biosphere reserve and the surrounding territories with the development of various types and categories of tourism: ecological, ethnic, cultural, scientific, recreational in the context of overall economic development of the entire South-East Kazakhstan region.

The used lands are mainly pastures, other lands, to less extent hayfields. Peasant farms mainly graze small and large cattle, to a lesser extent crops are grown (barley, corn, sunflower, etc.). In the grazing areas there are several dozen shepherds' cattle with buildings designed mainly for keeping livestock. The road infrastructure on the territory of the reserve is represented mainly by dirt roads between the cordons. On the lands of settlements there is an asphalt road of common use, connecting the village of Chundzha with the metropolis of Almaty. The central office of the reserve and the main engineering communications and structures are located in the village of Chunja. The central office of the biosphere reserve is provided with telephone communication, electricity, running water, local sewerage and heat supply. Providing the engineering infrastructure of the reserve is incomplete, this concerns cordons, many of which lack electricity. Most of the cordons are provided with electric generators to meet electricity needs

On the territory of the reserve, in future it is possible to create a wine cluster and build additional links of technological processes and auxiliary production facilities for the production of packaging, trademarks, packaging materials, etc. Also, it may be very profitable for the district to create greenhouses based on the thermal energy of thermal springs. Greenhouse farms in many respects would solve the problem of supplying Almaty with fresh vegetables, provided that the quality of the Chunja-Almaty highway is improved. Near the reserve there is an ongoing construction of the Western Europe-Western China highway (with a length of 150 km on the territory of the Uighur district), with total estimated cost of around 17-20 billion tenge. Undoubtedly, this will give a powerful impulse, both for the development of the whole district and for the settlements adjacent to the highway.