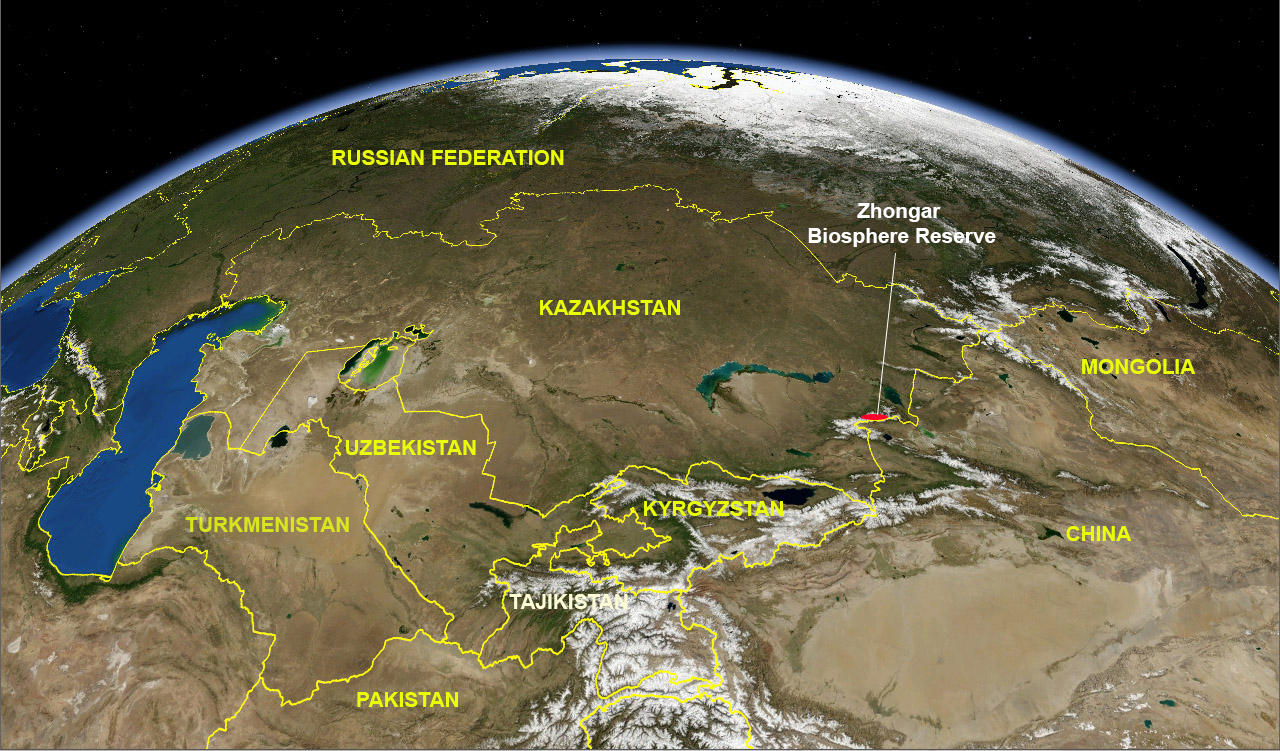 Zhongar-Aalatau State National Natural Park was established by the Resolution of the Government of RK as of 30 April 2010 №370. Total area of national park was 356,022 ha, of which 200,060 ha were of the forest fund. Besides lands of state forest fund, the lands of the park contain reserve lands with total area of 155961.9 ha.

Zhongar biosphere reserve is located on the Northern macroslope of Zhetysu Alatau ridge and embraces all mountain ecosystems characteristic for mountains of Tien Shan and all Central Asia. The mountains of central Eurasia concentrate the main forest resources of the region.

It is noteworthy that 1.05% of the total area of Zhongar reserve is occupied by wild fruit plantations of Sieverse's apple, which is the progenitor of all cultural varieties of apples in the world and needs special protection to ensure the conservation and restoration of the unique agrobiodiversity of fruit forests of global importance.

In administrative respect the territory of Zhongar biosphere reserve is located in Sarkand, Aksu and Alakol districts of Almaty region, with total population of 151,000 people. It is necessary to attract the local population in the ecological tourism development in order to raise the social-economic level.

Ecological tourism might provide the high level of life for people on th ebasis of ecologically sustainable nature use. 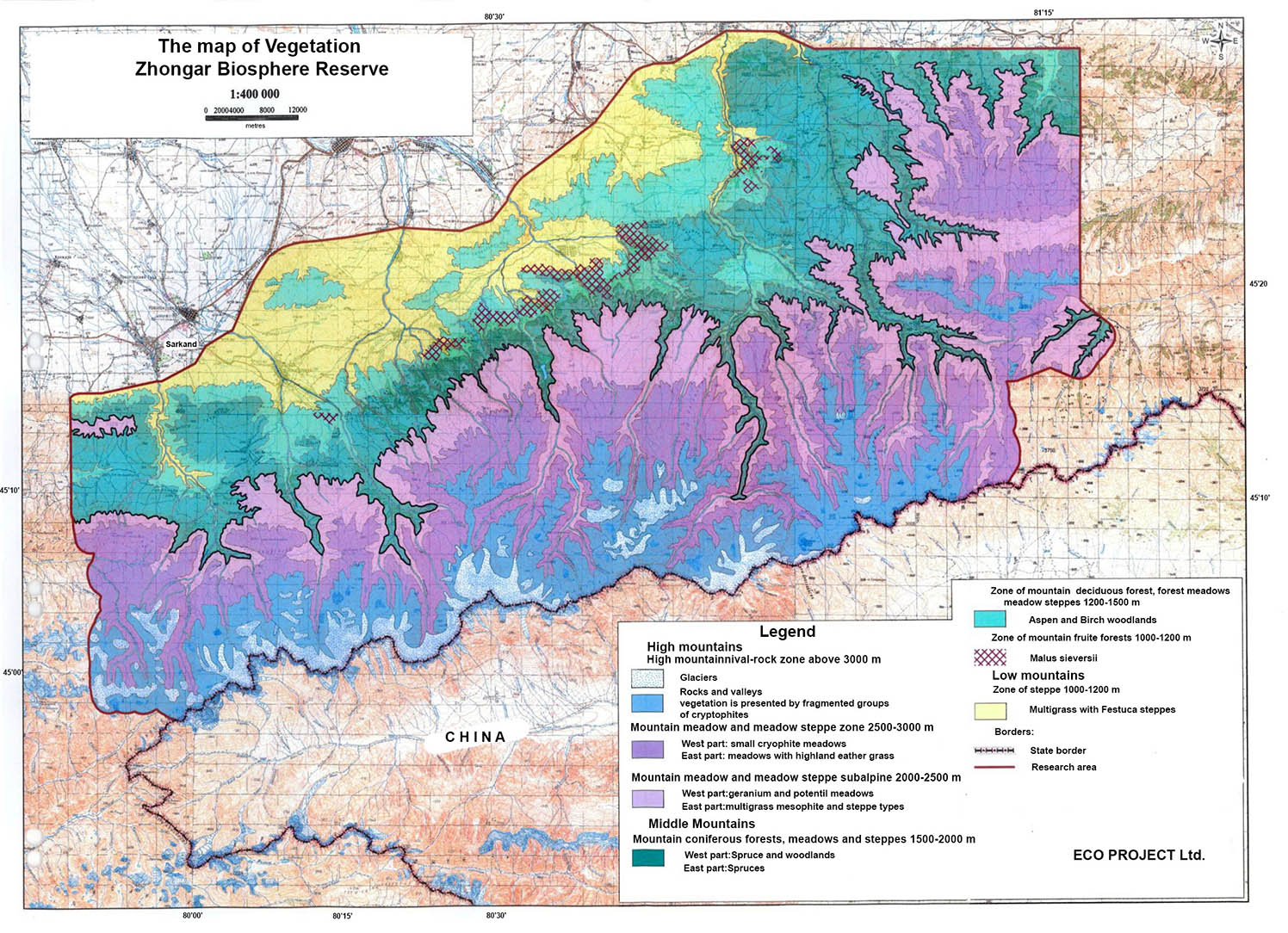 The territory of Zhongar biosphere reserve is located in the mountain and highland part of Zhetysu (Zhongar) Alatau. According to the zoogeographic regioning this territory belongs to Central Asian subregion, Montante-Asian province, Dzhungar- Tien-Shan district, Dzhungar area. Zhetysu Alatau is one of richest in Kazakhstan's regions in the animal species diversity, with only Altai ahead of it. The reserve is located on the Northern macroslope of Zhetysu Alatau ridge and embraces all mountain ecosystems of Tien Shan. The territory of the biosphere reserve contains the following main ecosystem types:

Flora of Zhetysu Alatau includes 112 families, 622 genera and 2,168 species, 76 of which are endemic, recorded only at this ridge. The territory of Zhongar biosphere reserve contains not less than 75% of all species growing in Zhetysu Alatau. To date there are 707 species of higher vascular plants registered for this territory from 413 genera and 78 families, further inventarization works are needed. 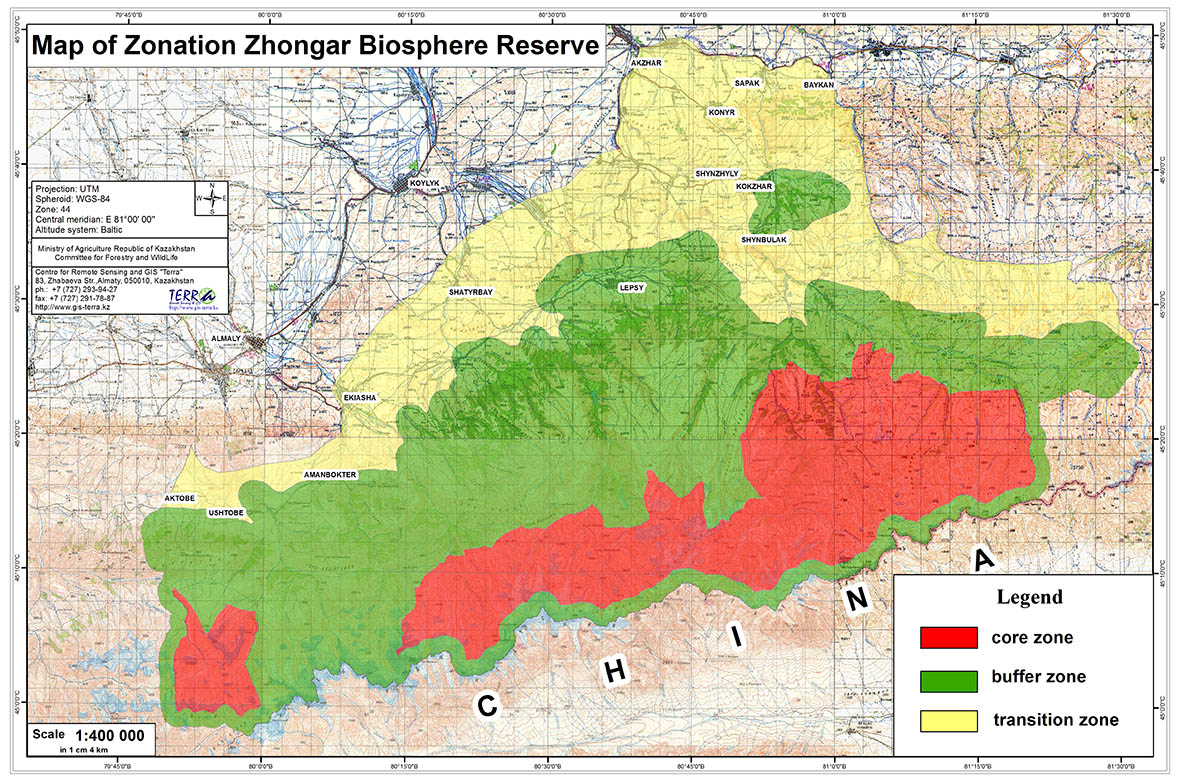 Northern ridge of Zhetysu Alatau, where the national park is located, goes down to North in several steps and is abrupt to the adjacent plain by terraced tectonic cliff of 1,500 m in height. Zhetysu Alatau stretches from West to East for 400 km and consists of two main waterdivide ridges – Northern (Zhetysu Alatau itself) and Southern, divided by Koksu – Borotolinskaya depression. The Southern border of the park goes along the protective zone of the state border of Kazakhstan with China. The Western border goes in Ulken Aidausay river valley, Northern border – along the Northern foothill of Zhyldykaragay to Sarkan river, then along the foothills of Markatau mountains to Topolyovka village and along the ground road to Lepsinsk village, then along the foothills to the junction of Tentek and Kipeli rivers through Bezymyannyi Klyuch river valley and along Tentek Vtoroy river valley to the protective zone of state border with China. Here there is a high mountain – Semyonov Tien Shanskiy peak – 4,622 m above sea level.

In 2015 the technical-economic justification of Zhongar-Alatau State National Nature Park was corrected in it functional zoning and general plan of infrastructure development, approved by the Decree of the Committee for forestry and animal world № 181 as of 15.07.2015.

According to this correction, there are the following areas of the functional zone:

Average annual, monthly and day air temperatures decrease with absolute altitudes increase. This decrease is about 0.6°C in each 100 m of altitude. So, at the foothills of Zhetysu Alatau annual air temperatures are 6-7°C, and at the altitude of 2,500 m they are close to -1°C.

The coldest month is January, day air temperatures are -5-10°C, nights -15-20°C. In the coldest months day temperature may decrease in the foothills down to -40°C, in the mountains – down to -31.6°C, absolute minimum might reach -49°C. The first frost happens in August-September, the last – in May and early June.

Duration of the warm period in the middle mountain zone is 6-7 months, at the altitudes of 3000-3300 m – only 1.5-2 months, and at the altitude of more than 4,000 m there are no long periods with positive temperatures.

Precipitations in Zhetysu Alatau are unevenly distributed: the majority falls on North-Western ridge slopes, the least – on the Eastern, South-Eastern slopes and interhill depressions (Table 4). Most precipitation is observed at the altitudes of about 2,500-3,000 m, from altitude of 3,300 – 3,500 m their amount decreases. In the valleys and depression, located inside the mountain massif, there is less precipitation: 300-400 mm a year. The most moist areas are valleys of the Western part of Zhetysu Alatau, open to the West, where precipitation amount reaches 1,300-1,500 mm.