The core area of the BR is a strictly protected area of Karatau State Strict Nature Reserve, which is a mountainous natural complex of Karatau part of Western Tien Shan. BR buffer zone according to the legislation of the Republic of Kazakhstan is a special protected zone of the reserve, which covers two-kilometer strip along the perimeter of the core zone of the reserve. The transition zone of the Karatau BR is located on the territory of the lands of the city of Turkestan and Kentau, South Kazakhstan region. The total area of the transition zone is approximately 100 000 ha. As a general management body the Coordinating Council of Karatau BR was established, it includes representatives of the state nature reserve, users of natural resources, local authorities and public organizations. Currently, there are management plan of Karatau State Nature Reserve, which refers to the management of core and buffer zones of the BR. Natura users have their own management plans that correspond with management plan of the reserve. As a result, a simple union of all these plans is essentially a common integrated management plan for the entire territory of the BR. All disputes are solved at the meetings of the Coordination Council of the BR. Currently, the main scientific and technical support on the territory of the BR carries staff of Karatau State Nature Reserve. The international GEF / UNDP project "Conservation of biodiversity of Western Tien Shan" (1998-2004) enhanced the material base and held numerous training seminars. Every year, the administration of BR Karatau hosts various festivals and events (March of parks, bird holiday, children's art competition, and others.).

Karatau Biosphere Reserve is located in the central part of the Karatau ridge, which is an offshoot the north-western arches of the Tien Shan in the territory of South - Kazakhstan region. Bordered by deserts Muyunkum, Kyzylkum, Betpak-Dala. The reserve area covers 34300 hectares in the north and north-east by the Suzak district; west of the border Suzak district to the confluence Bayyldyr and Tyuetas, to the mountains Karagashtau; in the south of the mountains Karagashtau River Taldybulak, Hantagi to Suzak district boundaries; in the east - along the Suzak district. The ridge has an asymmetric structure. South-western slope of its broad and relatively-flat.  North-eastern and northern slopes significantly different a steepness. The highest point of the ridge - the mountain Mynzhylky marked 2176 m. The length of the reserve in the meridional direction is - 28.3 km. (from 68o31' to 68o50' east longitude) in the east-west direction - 23.6 km. (from 43o36 'to 43o49' north latitude) of the coordinate system. 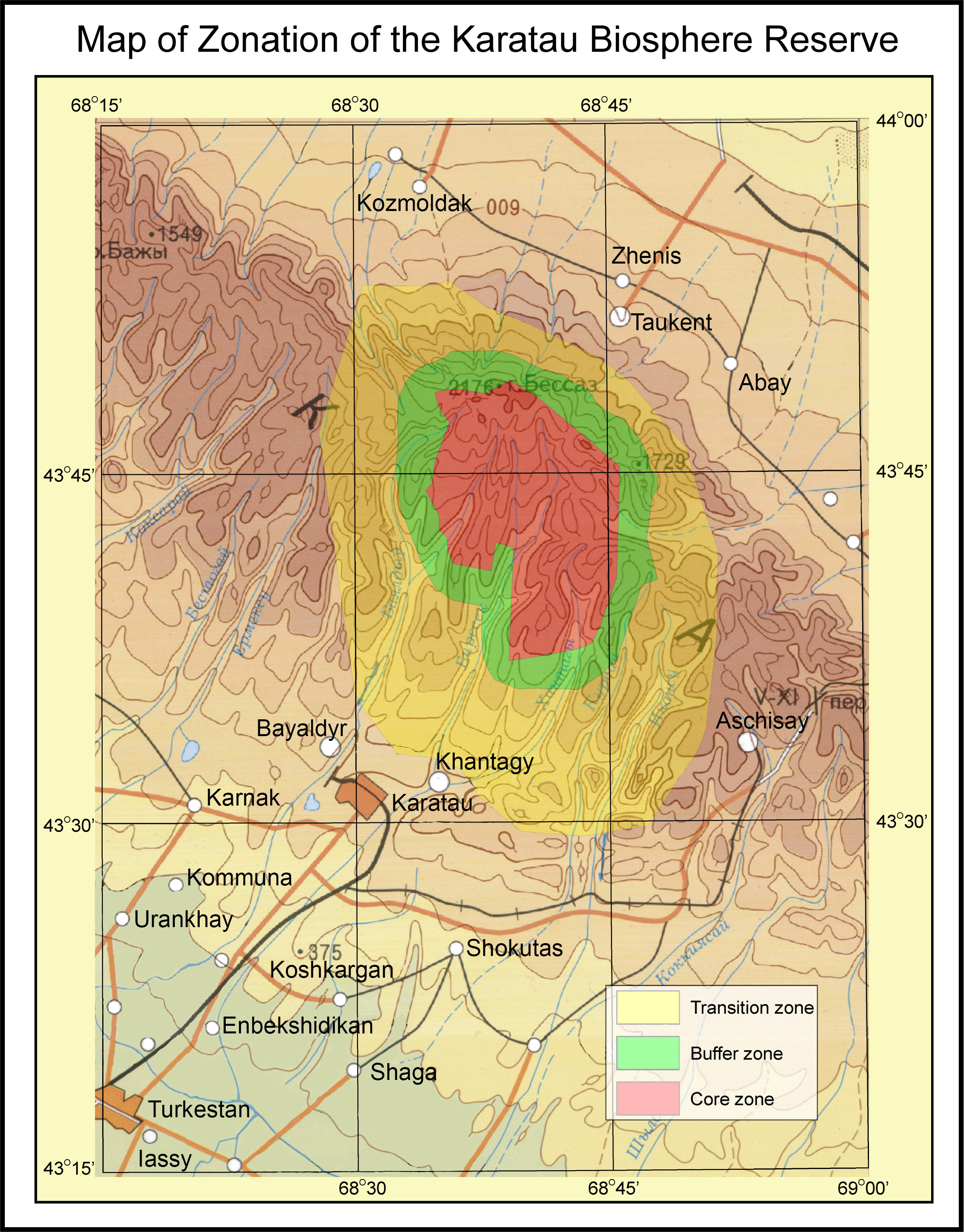 Karatau flora characterized high content of endemic species and subspecies level, has 153 taxa, or 9% of the total (1666 species) (Kamelin, 1990). This phenomenon is explained by the relative isolation from other mountain ranges of the Tien Shan are deeply embedded in the flat space of the desert zone in the watershed basins of Chu, Syr Darya and Talas. Botanical and geographic significance of Syrdarya Karatau enhanced by the fact that many of the ancient Mediterranean genesis and plant communities formed by them friganoidov, shiblyak and semisavannas, located in the extreme northern limit of its geographical distribution. By focusing Tau holds the northern border areas of many species of flora of Central Asia and Kazakhstan. Orographic features and the antiquity of the Karatau mountains contributed to the formation of the original flora with the highest number of endemic and rare plant species. Increased human pressure on the territory of the ridge led to a decrease in the proportion of biological diversity. It can be stated that under the influence of economic development of the territory of the natural reserves and habitats of endemic and rare plants more reduced, and some of them are disappearing or are threatened with extinction, destroyed the whole plant landscapes. Thus the protection of the gene pool of rare, endemic and relict species surviving from ancient geological times and shed light on the history of the formation of vegetation and flora is of great scientific importance.

Karatau ridge is the northern outpost of the spread of the ancient Mediterranean landscape and has a unique range of natural ecosystems with special components of their floristic and faunal composition and coenosis diversity.

By the number of endemic species the Karatau BR occupies a leading position in the flora of Kazakhstan - more than 153 species. On the territory of the reserve created presumably there are about 600-700 species of higher vascular plants, of which according to scientists 76 species are endemic. There are scientific information about 65 endemic from the central part of the Karatau, the location of some of them in places of primary data collection were not found. According to the results of botanical research in 2010 in the reserve to locate the 90 rare plant species, of which 64 species - is endemic plants and 36 are included in the Red Book of Kazakhstan (1981), 41 species included in the list of rare plants, approved by the Government of the Republic of Kazakhstan of 31 October 2006 number 1034. 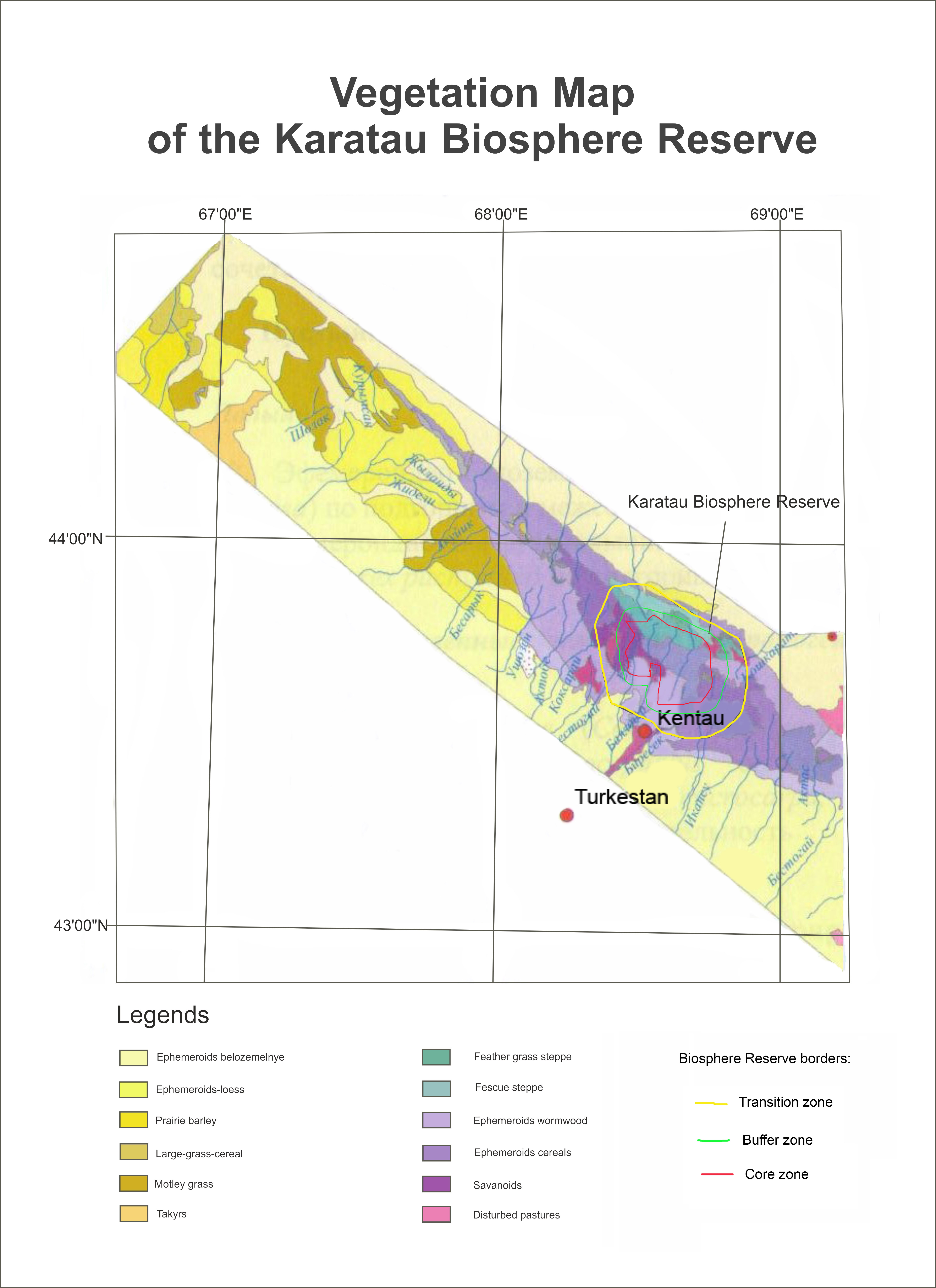 Karatau BR is an extremely important natural complex biodiversity of the Western Tien Shan. Karatau BR  located within the botanical-geographical province at its Central - Karatau district, which consists of two parts - north and south (the highest point of city Bessaz, 2167 m.). The main criterion for association of the territory into a single province is uniform nature of the relief (lowland, midland) and active participation in the structure of vegetation endemic Karatau elements (mainly friganoidov - upland xerophytes) which form the basis petrofitnogo complex species and actively involved in community composition foothill desert, steppe, savannah and shrub vegetation types.

Today in the Biosphere Reserve is working on the definition of complete and stable reserved mode, which should be the highest category of protected areas is as follows:

- in the determination of buffer zone watershed of river systems, which are the main sources of water supply and irrigation in the region;

- spectacular lowland, midland landscape has great potential for the development of various forms of eco-tourism;

- implementation of strict protection of natural landscapes of the Central Karatau;

- Flora of vascular plants of Karatau ridge all over (420 km) has 1710 species and subspecies in 578 genera and 108 families. By the number of endemic species (153 species, t. E. 9% of the total floristic composition), Karatau is the first among all the Central Asian regions.

- 96 species included in the Red Book, that is, 26% of the total number of species identified for the entire Republic;

- the reserve identified 61 species of endemic plants and 52 species included in the Red Book;

- Of the 26 species of mammals selected as indicators for the Western Tien Shan, in the Karatau region found 20 of them in the Red Book of Kazakhstan listed three types: Karatau argali, Indian crested porcupine, and stone marten.

- The only endemic Reserve is Karatau argali (Ovis ammon nigrimontana);

About296 species of birds marked for Karatau, including ornithological Chokpak stationary during the expedition of the project met 139. The greatest diversity of species observed for the Northern Karatau (72 species), Borolday (71), the northern part of the Greater Karatau (62) and less for Daubabinskih Mountains (52), the southern spurs of the Bolshoi Karatau (48) and the Small Karatau (43). The present borders of the reserve to date identified 118 species, including the protection zone. The rare and endangered birds included in the Red Book of the Republic of Kazakhstan (1996) in the Karatau BR recorded 12 species. For today from invertebrates found 182 species, 15 species listed in the Red Book of the USSR (1984) and the Red Book of Kazakhstan (2005, 2006).